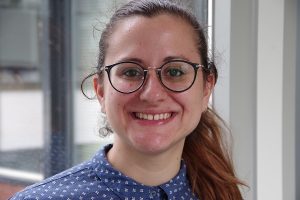 My name is Stefania and I’m a medical student from Italy. I’m doing a three-month internship about Individual Placement and Support here at Kenniscentrum Phrenos.

What mostly interests me about IPS is that it’s a recovery-oriented process, that has the goal to help people with mental illnesses to find a job in the competitive market.
The concept of recovery gained importance in the 1980s, when the traditional approach to mental illnesses started to show its limits. Before, in fact, medical operators were mostly focused on the treatment of symptoms, without giving importance to the rehabilitation of the person, and the reintegration of them into society. This was also applied to the working aspect of patients’ life. There was the belief that mental ill people couldn’t endure the stress of a competitive work environment, and they were mostly involved in sheltered job inside cooperatives.

This was true especially in Italy, where, following the tradition of a Community Psychiatry promoted by an Italian psychiatrist called Basaglia, cooperatives started to develop in different cities. At first it worked well: in fact it was the era of deinstituzionalization, and the main concern was to find a place in the society for people who had been dependent on mental services for a very long time.
Years later, though, the role of the person with a mental illnesses and the approach to illness itself underwent a huge change.
Illness didn’t define the person’s life anymore: it was just an aspect of a wider and more complex person, that had goals, aspirations and desires.

While before the main goal had been the remission of acute symptoms, it then became the actual reintegration of the patient within his community.

In this context, mental operators started to recognize the importance of having a satisfying and fulfilling job in the construction of a person’s identity and self-esteem.

IPS regards working as a fundamental element in the process of recovery.
While applying IPS, there’s the knowledge that it’s necessary to help the client to be a independent person, actually integrated within the community. Reaching these goals, through a job, can improve different aspects of the person’s life and can help the process of recovery.